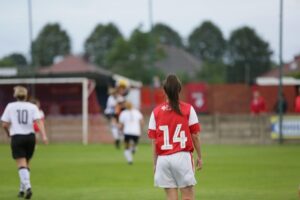 Rotherham United Women secured their first three points of the 21-22 league campaign in a strong 2-1 win over Notts County Women at Roundwood Pavillion.

RUWFC capitalised on their bright, energetic start as they opened the scoring to make it 1-0 within 10 minutes from a cracking Helen Lynskey header that crept over the line after hitting the underside of the bar.

Despite conceding first, County repeatedly attempted to test RUWFC’s back four with their attackers’ pace and through-balls but were met with nothing but solidarity. Grace Wardle and Helen Lynskey formed a water-tight Millers backline, not giving Notts’ pacey forwards an inch of space.

Lynskey doubled her tally with an unstoppable header from a pin-point Nicole Cooper corner to make it 2-0 just before the half-time whistle. The textbook header saw the former professional Lynskey leap above County defenders and arrow it into the top right hand corner, earning herself her 3rd goal in 2 games.

County’s front 2 looked impressive throughout the game, but couldn’t seem to get it right in the final third as many second half chances went amiss. Georgia Ward was fantastic between the sticks for the Millers throughout the game and pulled off an incredible lunging save at 70 minutes to deny the County substitute.

The Millers failed to take advantage of a couple of late chances, and County finally found the back of the net to make it 2-1 at 85 minutes with an astounding looping half-volley that flew into the top left hand corner from outside of RUWFC’s penalty area.

The Millers however kept their heads up and managed to see out the game to gain the well-earned 3 points despite the late pressure from Notts County. 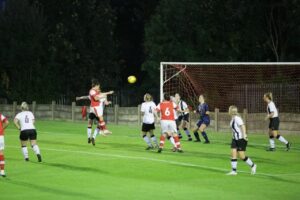 “We showed mettle and resilience tonight, every player put in immense effort to see out the game. We need to build on tonight and continue to push on, work together and support each other to grow as a team as the season goes on.”

“It’s a fantastic result for our first game of the season and it’s a huge 3 points for us. We aim to keep building on this performance by continuing to work hard in training. The girls’ work rate was incredible tonight and it was fantastic to see and be part of”.