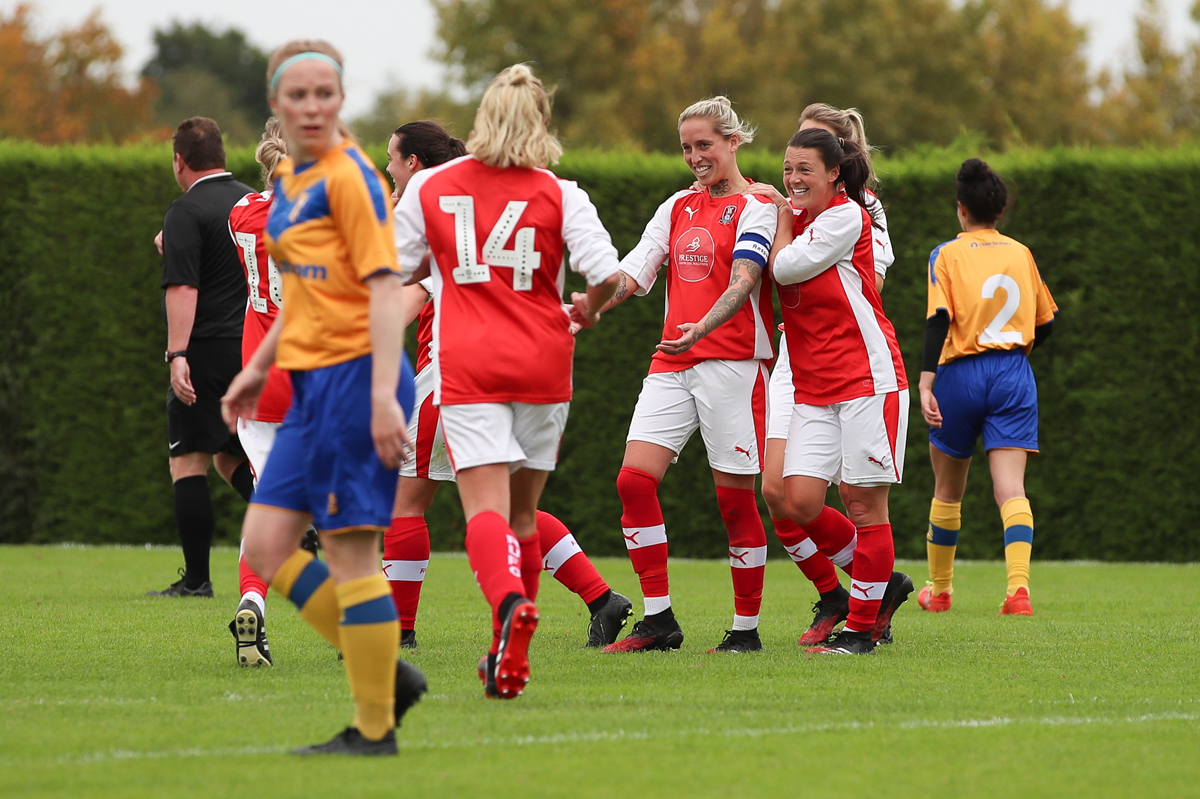 Rotherham United deservedly came away with the three points in their first home league fixture of the season, thanks to goals from Bradie Wild, Amy Pollock, Lucy Ridley and Natalie Shaw.

The hotly anticipated game lived up to its expectations, with Mansfield Town Ladies starting strong by capitalizing on a cross-field intercepted pass with a lobbed goal, just seven minutes into the game.

This seemed to wake the Millers up, as they equalized three minutes later with a sweet strike from outside the box from Bradie Wild, which rifled straight into the left-hand side bottom corner under the outstretched arms of the Mansfield Town keeper.

Bradie Wild netted Rotherham’s and her second goal of the game after she controlled an exquisite cross field pass with precision, and then hit the ball on the volley from the edge of the box that rocketed straight into the top corner to give the home side a well-deserved lead.

Rotherham United continued to exploit the space down the right wing with some blistering runs from Bradie Wild and some pin-point passes from Amy Pollock in the heart of the midfield. The home team therefore started to dominate in the run up to half time, with Lucy Ridley coming close with a headed chance and Bradie Wild again showing her prowess in front of goal with another driven strike that forced a brilliant save from the Mansfield Town keeper.

This period of intense pressure lead to a fantastic individual goal from captain Amy Pollock, who hit a blistering right-footed strike from outside the box 35 minutes into the game to make the score 3-1 to Rotherham United Women.

The Millers didn’t show any signs of easing up before half time, as Lucy Ridley increased their lead further by pouncing onto a loose cross that bounced off the Mansfield Town Keeper to make the score 4-1. Rotherham United managed to hold on to their lead going into the half time break, thanks to an incredibly timed last ditch challenge from defender Niamh which almost certainly denied the visitors a one on one goal scoring opportunity just two minutes before the whistle.

Rotherham continued their strong performance by hitting the post straight away after the break from another thunderous strike from Amy Pollock. However, the trailing team managed to score a consolation goal against the run of play from a breakaway goal to make the score 4-2 after 55 minutes. This goal gave Mansfield Town a boost, as they started to have more possession in Rotherham’s half.

However, this run of play didn’t last long as Rotherham gained possession back and won a clear penalty from a heavy challenge just inside the Mansfield Town box. The referee didn’t hesitate to blow his whistle, and Natalie Shaw cooly slotted the ball into the bottom left hand corner; putting the ball out of the keepers reach and the game out of Mansfield Town’s. The match ended with the final score at Roundwood being Rotherham United Women 5-2 Mansfield Town Ladies.